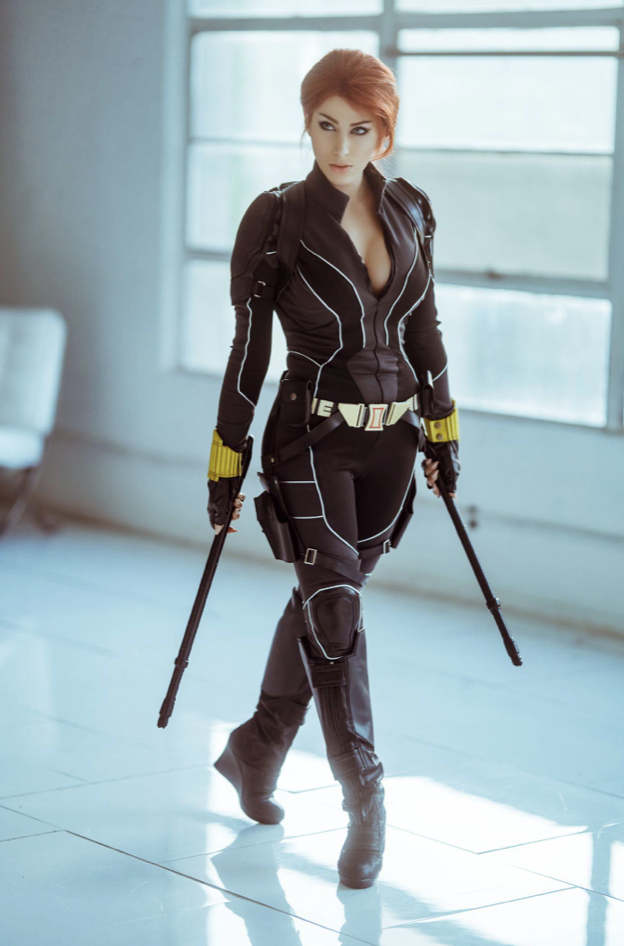 Cosplay is growing in popularity all over the world, particularly in the United States, China, and South Korea. The performance art often involves wearing costumes and make-up which represents anime characters, video games, or television and film. Cosplayers are known for being experts in the character or subject matter they’re replicating.

Background: Where It All Started…

Elizabeth Rage was born and raised in Sag Harbor, New York City. Where she attended Manhattan School of Music and New York University. Elizabeth has always been passionate about music and film. She founded Express Record Filming, where she collaborated with some of her friends to create music and film at an affordable rate.

At NYU, her passion for film grew. Elizabeth assisted in pioneering a new media channel called, AVBYTE, which showcased musicals and gained considerable views on YouTube. It is here, where she first discovered and considered the art of cosplaying as a lucrative career. After the success of AVBYTE, Elizabeth went on to costume in a CW Original: Vampire Musical and has worked with several recognized brands, including Soul Calibur, King Vader, and Only Fans.

Elizabeth started creating and curating her own costumes. At the time, it was the most affordable option. She identified many opportunities to generate an income from the performance art, and her modeling experience was a bonus.

Elizabeth won Costume Contest Grand Prize Winner of Disney D23 2015 and has been a proud member of Actor equity for the past 10 years. She may have started with small cosplaying projects, but she has since moved on to bigger and better opportunities, including producing the BBC SDCC Fashion Show.

Most recently, Elizabeth cosplayed the Marvel, highly trained and former Russian spy, Black Widow. Photos of Scarlett Johannson, the Marvel Black Widow actress, made their rounds on the internet, where she was captured wearing a white costume this time around, which quickly gave rise to a new Cosplay on the character.

Elizabeth, who is synonymous with stepping into the shoes of many fictional characters, uploaded her Black Widow cosplay on Instagram. She replicated the white costume, worn by Scarlett Johannsson, as well as the original Black Widow costume. Both Instagram posts received over 11 000 likes, this, of course, added to her already huge following. Some Marvel enthusiasts are even wondering if Elizabeth will soon take over the role of Natasha Romanoff.

How Does Elizabeth Rage Deal with Canceled Conventions in the Age of COVID-19?

Cosplay conventions are without a doubt, very important to cosplayers. It is also a great opportunity for publicity and connecting with other players in the industry.

However, the internet is a wonderful thing, and with so many users engaging in Instagram, Facebook and Youtube, there is no limit to the number of exposure celebrities can gain. Just taking a look at Elizabeth’s Instagram and Facebook handles, should give you an idea of the amount of engagement she receives on her posts, regularly.

Elizabeth is also able to connect with other cosplayers on Facebook groups and other online events. Canceled events will not restrict this multi-talented cosplayer from showcasing her art on her social media platforms. Cosplay is not defined by conventions anymore as many cosplayers are doing more and making cosplay on streaming.

What’s Next for Elizabeth Rage?

Well, Elizabeth Rage has spent the last year traveling abroad for featured guest appearances in Mexico, Europe and the Middle East. She plans to expand her travels even further across the world and collaborate with other artists world wide.

Besides the many cosplay projects that she continues to work on, Elizabeth Rage is also passionate about equal opportunities for sex workers, especially in mainstream media, feminism, gender equality, and lastly, funding music education programs for public schools.

It should be noted that Elizabeth has developed a great track record for pursuing her ambition. Fans who would like to engage with her one-on-one should visit her Only Fans page.