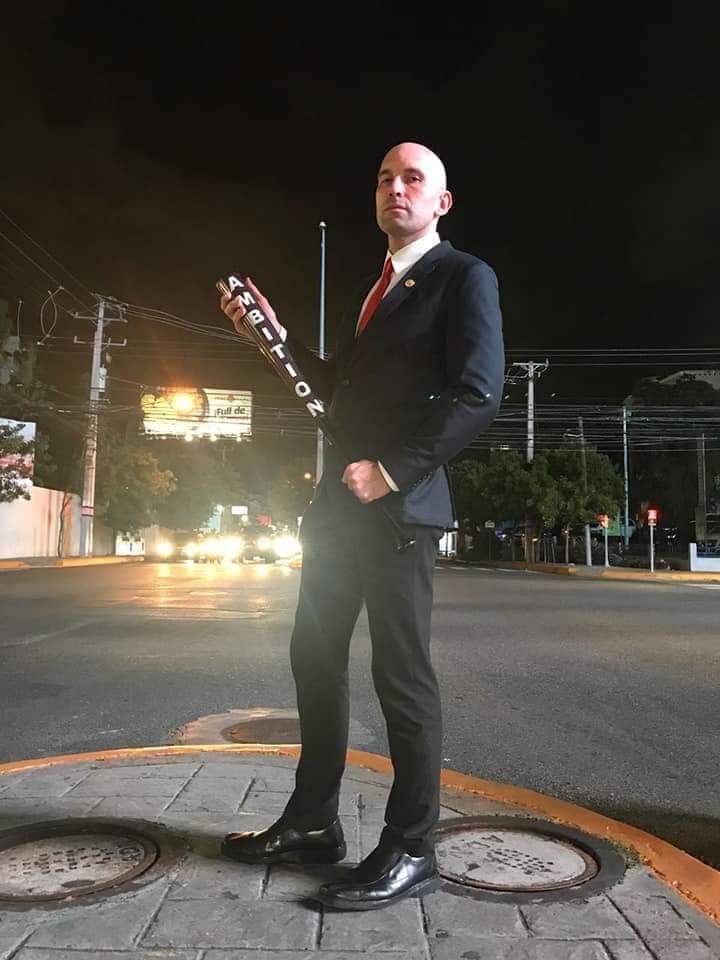 Benjamin Irish, the wrestling promoter turned statesman who swings a baseball bat with the word AMBITION on it was allowed to “cross the bar” in New York Federal Court on January 26 to represent three Dominican women in a sensational lawsuit they filed based on Constitutional Rights. The court conference, a pre-trial hearing, was conducted remotely.

Despite not being an attorney, Judge Sarah Netburn allowed Irish to fight for the plaintiffs for nearly 40 minutes. Irish successfully contended two motions to dismiss and a motion for summary judgment, arguing that the motions all revealed new evidence and facts that enhanced the Constitutional standing of the plaintiffs’ lawsuit. The plaintiffs also received default judgement approval against two of the 21 defendants they sued.

The high profile civil case and the attached criminal case against one of the defendants, collectively an assortment of 21 organized crime affiliates, has been regularly covered by the New York news media. The lawsuit, filed by 3 Dominican women from The Bronx, alleges their landlords and 2 state actors, a New York City marshal and a guardian ad-litem, were complicit in a “smash and grab” eviction of the plaintiffs in 2018 during trial in the Bronx landlord-tenant court.

“They decided they didn’t care what the court would rule.” Said Irish. “They put these people out into the freezing cold and they used a New York marshal with a badge and a gun that they hired to do this. They took their entire life’s possessions, their degrees, their passports, their family heirlooms, smashed the apartment to shreds, and then went back to court two weeks later and the judge in The Bronx let it get swept under the rug. This case howls for Justice, and more are coming, this Marshal has a history of this.”

In a wild turn of events, it was revealed that one of the defendants is being charged for operating a methamphetamine laboratory out of an apartment in the landlord’s building, and using different names in both his civil and criminal cases in the same court.

Irish noted to the court that there is a need to determine if any of the defendants are government witnesses tainting cases in the court, lucidly explaining that the landlords, who knew of the multiple aliases and arrests for drug trafficking, made statements to the DEA and news media that the drug-dealing defendant, the building’s superintendent, had been terminated although in reality they continued to employ him under another name.

Irish argued that the reason the landlords rented the women the apartment was not to profit from the New York real estate business but to support and fund criminal enterprises including “operating a meth lab across the street from a school, above a daycare center and down the street from another school” Irish told the court, noting they had identified other members of the organization that may be named as additional defendants.

The lawyers for the landlords in the Bronx case, who are also defendants in the $10,000,000 Federal lawsuit, made the admission they had hired the marshal to perform evictions on many occasions. The marshal, who has sought qualified immunity in this matter, is accused in court filings of perjury. Irish highlighted to the court that his attempt and the attorneys attempt to remove the case to the state court was deceptive, citing previous cases where the New York Supreme Court affirmed the same marshal conducted an unlawful eviction but that it lacked jurisdiction to try the case because the amount in question exceeded $25,000.

“They have received directed judicial knowledge” argued Irish, stating “this would leave the plaintiffs with no legal recourse.”

“The marshal received decisions from two State court judges that he does not qualify for immunity this way.” Irish told The Reformer. “Now he is trying it again. All of this lying, all of this misconduct… The marshal, the guardian, the lawyers, the landlords, none of them have ever once presented a warrant, proof of service, notification or consent from the Bronx court. That’s because it doesn’t exist. This has been three cases in three years. It’s time to do the right thing by this family, it’s time Justice is served.”

The allotment of Irish as advocate in the nation’s revered Southern District court has set precedent at a time when courts are struggling with a never-before-seen eviction crisis, a result of moratoriums against evictions being lifted and funds for state assistance programs having dried up.

“I am concerned that so many judges have referred evictees to ERAP and programs like that to help pay rent for people who lost their jobs and in some cases their spouse or parents as their source of income during Covid, and those programs say ‘we would like to help you but we are broke too’. It’s a terrible dysfunction. But property and Constitutional Rights are intertwined, and when landlords cross the threshold from real estate to being gangsters, that’s when it’s time to get the Federal government involved. The only way you can break into an apartment and take everything, smash it to pieces, try to extort the poor people you just terrorized and left destitute, and then go to court and get away with it is corruption. This is all about corruption.”

Hit a home run with that bat of yours, Mr. Irish…