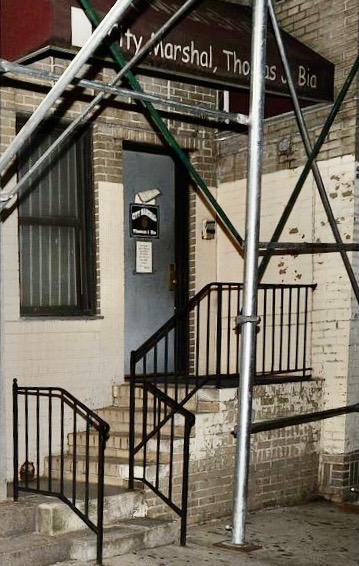 Ask any litigant in Bronx Housing Court who Thomas J. Bia is, and you are likely to be scowled at. He is the New York City Marshal for The Bronx, the city’s poorest borough, responsible for oversight of evictions of the city’s unfortunates, the man who enforces the orders of the court, the man who hands you a warrant that removes you and your belongings from your home. The man who kicks you to the street.

As Eric Adams is poised to take the reins as the city’s mayor poised to clean house and apply law and order, he will hear from the city’s evicted masses, the elderly, the sick, the unemployed and the destitute, who will describe their horror stories about the city Marshal for The Bronx.

“Thomas Bia is corrupt. Him and that Judge Black.” Said an elderly man who claims Bia allowed his landlords access to his Fordham apartment without a warrant, or a list of items seized, both requirements. “The damn case wasn’t even over, that man and that Judge, they are working together, everybody knows this!”

There may sadly be some credence in his claims. Bia has now become the subject of a Federal Investigation following a slew of lawsuits, including one by three Bronx women in district court alleging he helped landlords rob their apartment, smashing it to bits and rendering it inhabitable. The majority of the claims assert Bia executed evictions during the trial process, leaving the city’s landlord-tenant judges helpless. (New York’s civil court code does not allow for judges to render decisions of a criminal capacity beyond $25,000, leaving Bia’s victims helpless in their most desperate times.)

The recent Federal lawsuit, seeking ten million dollars in damages, could put the nail in the coffin for the wayward city marshal. “James Johnston, the outgoing city counsel, has begun to look into this.” Said a source close to the Bia investigation. “This is one of the more serious corruption cases under the color of law this city has seen in decades. It harks back to the days of the Mafia. It is truly racketeering and is a black eye on the Department of Investigation. The civil rights deprivations are shocking.”

The city’s landlord tenant lawyers are closely following the Federal lawsuit, anxious to see if the scandal results in Bia’s removal and indictment.

“This is like an open secret in The Bronx judiciary.” Said a tenant advocate who asked her identity be protected for fear of reprisal. “Bia likes to play Dirty Harry. Everybody knows his in-laws are high-ranking police, and he runs his office like as if due process is non-existent in this city.”

The Federal case, where the three female petitioners are asking for a protective order is a “a bear trap” for Bia who has oddly decided to represent himself and submitted a perjurous answer. “It’s straight perjury. He is making a qualified immunity claim and seeking removal to state court, when the State court already warned him he didn’t qualify for that status.” Said the advocate.

And the evidence is there. In 2014 a military veteran named Mark Tunne sued Bia in State court claiming the mafia-connected Bronx marshal executed a warrant on the same day he received it, never informing the resident and forcing him into a homeless shelter. In that matter Bia sought qualified immunity, the same as he is requesting in Federal Court. In the Tunne matter Judge Peter Moulton denied the immunity bid for Bia, showing black-letter law that he does not qualify.

The Federal case presents the allegations that Bia seized U.S. passports and property deeds in the “smash and grab” he has admitted to overseeing, even if those judicial statements were made by a public official “playing lawyer”.

“He knows that he doesn’t qualify, he is trying to pull the wool over the Federal Judge’s eyes.” Said the advocate. “That’s why he is pro se. In his mind he thinks he is going to get this remanded to State court, because the judges have no jurisdiction on matters in this amount here, but in 20 years doing this, I have never seen anything like this. He has made some enemies, and those chickens are coming home to roost. The evidence is overwhelming.”

Calls to Bia’s Bronx office went unanswered as of press time, and he could not be reached for comment. Marshal Bia is an independent contractor for private parties, landlords who hire him for an agreed price to supervise their evictions. One of those parties is the Genevese crime family, a well know real estate racketeering family from New Jersey.